Half Moon Caye is a tiny island about 2 hours from mainland Belize, close to the famous Blue Hole dive site. I spent less than an hour on it so it might seem a little strange to write a post about my experience.

Well, it could have been longer because I did nearly miss my boat oops! More about that later. I want to tell you about Half Moon Caye, Belize in case your visit is as short as mine was so you don’t miss out.

Half Moon Caye is part of Belize’s Barrier Reef Reserve System, registered as a UNESCO World Heritage Site. Am I tempting you a little more to explore this island?

I booked a full day diving trip from Caye Caulker, including lunch. After our second dive, we then pulled up at a little jetty, alongside 2 or 3 other boats on Half Moon Caye. This pretty little island was our lunch stop. And I was lucky enough to see my first halo around the sun, a full circle caused by clouds that contain millions of tiny ice crystals.

Sorry, I can’t guarantee you will see this when you visit the island!!

After enjoying a lovely lunch. Rice and beans (a Belizean favourite) with chicken and salad. Very tasty, although you’ll need to get used to this combo as it was served on pretty much every trip I did the entire time I was in Belize! It was time to explore Half Moon Caye.

A few of our boat who had snorkelled close to the island had already had a chance to wander and told me of an osprey’s nest down one end of the island. It doesn’t take long to walk down to explore.

Visiting Caye Caulker? Check out these 18 awesome things to do on the island

It was only a little walk down the beach but as I got closer I noticed a lot of debris in the water. A brick structure that had collapsed and something rusty in the water. I had no idea what it was but it intrigued me. Later I found out it was the remains of Half Moon Caye’s historic lighthouse.

Hurricanes and tropical storms are common in this area, sadly in September 2010 ‘Storm Matthew‘ caused this historic structure to topple over into the sea. Although, there was something beautiful about seeing the waves gently crashing over the lighthouse on the shoreline.

A new modern structure is now in place on the island. This is where the new nest was. However, after a full 360 degrees walking around I can safely safe the osprey did not want to say hello to me haha! It was still cool to see. Back to the picnic area I then hear about the ‘Bird Tower’ on Half Moon Caye.

More birds – off exploring again on Half Moon Caye

I make my way down the winding path, it’s cool as the trees create shade from the sizzling sun. I’m enjoying the walk on the sandy ground, hearing the odd rustle in the bushes.

For a wildlife lover, it’s great, I am the only one on the path so it’s nice and quiet.  As I turn a corner who do I see but an iguana sunbathing right in front of me. He’s a pretty big guy, initially not that bothered by me being there! I do some good stalking…. to photograph him, then decides he’s had enough of being a celebrity and disappears off into the jungle.

Read next – 10 Things To Do In Ambergris Caye Belize

It takes me nearly 10 minutes to reach the ‘Bird Tower’, including my little stops on the route. Before I even climb the steps I can see birds nesting very close so I am pretty excited.

Now at this point, I might mention I am still barefooted, perfect for a sand island. But NOT for steps that have heated up in the sun. Wow was I in for some serious pain climbing those steps. I sprinted to the top, a wooden platform so I ripped my top off and used that to stand on. Haha, those birds were in for a real treat, I stood there in my bikini! 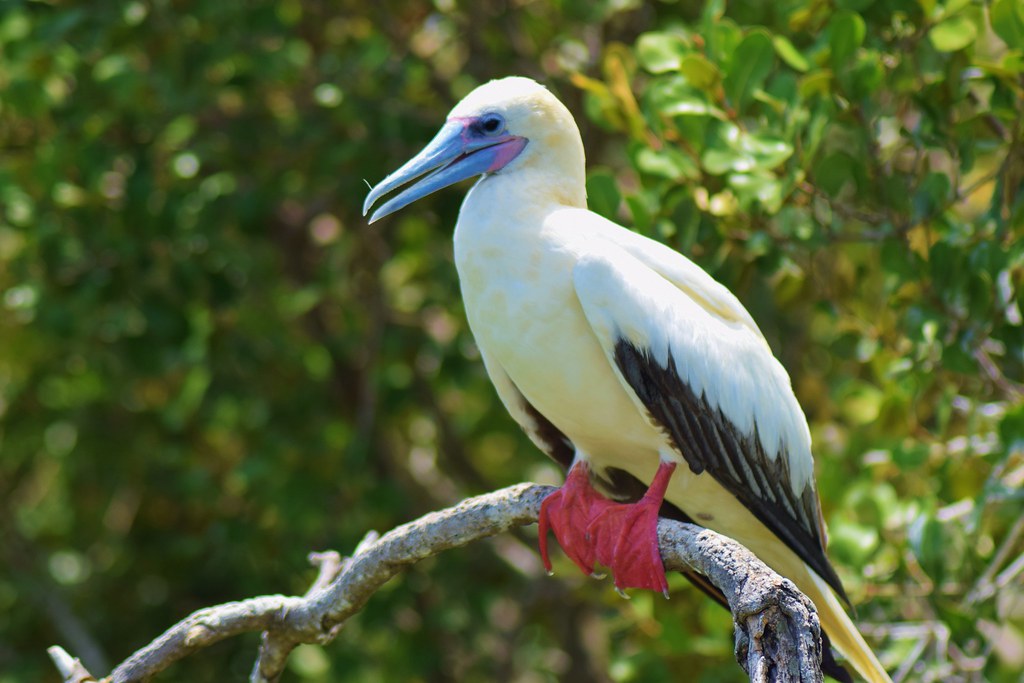 The second bird nesting and swooping low over your head was the Magnificent Frigatebird. There were a few nesting but plenty of birds flying overhead, it was a great sight.

After 10 minutes (or maybe more) taking photos, I need to head back to the boat. I have no idea what time it is leaving and anyway I don’t have a watch. I start a quick walk back to the jetty. But wait who else is on the path? It’s a hermit crab.

So torn between the decision of the dive boat leaving or photographing the hermit crab. Yep you guessed it I chose the hermit crab, I watched him scurrying about and capture a few pics.

Ok now I am really late, I start running back down the path towards the lunch spot and then on to our boat. Oops, it’s actually pulling away from the jetty. They were messing about but if I had done a leisurely stroll back I wouldn’t have been so lucky!

Good job I opted to run back after exploring as the boat was literally just pulling out. Oops, well time does seem to run away from you when you are exploring!

If you’re booking a diving trip during your time in Belize make sure to check whether this island is on your itinerary.  Or if you’re interested in staying a little longer check out these options for staying on Half Moon Caye. You might like to read 5 reasons to stay at The Phoenix Resort in San Pedro, Belize

Would you like to visit Half Moon Caye, Belize? Ask me any questions in the comments below

*Becky the Traveller participates in the Amazon Services Associates Programme, as well as other affiliate programmes. If you make a purchase through these, I earn from the qualifying links. This is at no extra cost to you. Read more here.

Click here to support ‘Becky the Traveller’ via Patreon