Belize Zoo isn’t like a traditional zoo. You won’t find animals from around the world. No tigers, elephants or penguins. So why go? Belize Zoo is home to over 170 animals with 45 species native to Belize. It’s a unique place to visit in Belize, best described as a cross between a rescue centre and a zoo. They also arrange night tours of the zoo, which are arranged via the Tropical Education Centre (TEC).

None of the native animals that live in Belize Zoo were taken from the wild. Some animals were brought in injured or sick. The most common reason is that they were pets that people could no longer care for. Belize Zoo aims to release as many animals back into the wild but those who can’t live their life out at the zoo cared for by the amazing team in Belize.

As the enclosures are created from the animal’s natural habitat, I found it a very enjoyable experience. The animals have plenty of space and genuinely seemed happy and relaxed. The zoo has quirky, handwritten informative signs around the paths. Delivering important educational messages about the native animals but also making you smile too.

If you love to travel and wildlife. In particular, learning about the animals that live in this country, then Belize Zoo is a must-visit for you. For me, as an avid wildlife lover, the Belize Zoo daytime and night tour was bound to be somewhere on my itinerary.

How did Belize Zoo begin?

In 1982, Sharon Matola arrived to make a documentary on the rainforest. Sadly, the project ceased and she was left to care for 20 animals. Wow, that’s a lot of pets! As the animals had interacted with people they were unable to be released back into the wild.

What Sharon did was the most amazing thing, she decided to start educating people about the animals, dispelling some of the myths that surrounded them. And so Belize Zoo was created, with all the native animals in Belize. 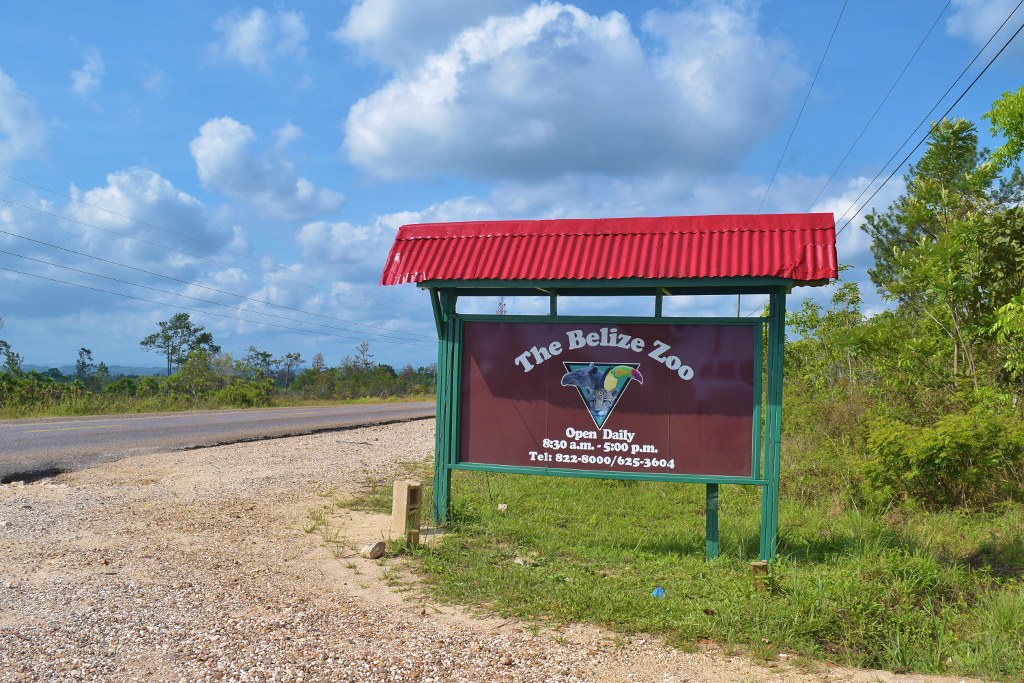 After 9 years, I guess things were getting pretty cramped at home. So in 1991, the zoo was moved to the 29-acre site where you can now visit. Belize Zoo and the Tropical Education Centre (TEC) work closely together on the conservation of Belizean wildlife. This is where you can organise the night tours from.

It’s estimated that over 12,000 students have visited Belize Zoo and participated in their educational programs. That’s pretty awesome. This quote is painted on the entrance wall. A great message to deliver:

The obvious time is, of course, to go during normal opening hours from 8.30 pm to 5 pm. However, as I ended up staying at the Tropical Education Centre (TEC), a couple of miles down the road, this opened up the option of visiting at night. I was lucky enough to be able to join another smaller group for the Belize Zoo night tour.

Then the next morning I returned to visit the zoo during daylight hours.

To help you make your decision I’ve described my experience on the night tour and daytime visit.

The night experience is a guided tour; there’s no option to go it alone. The tour starts in the small indoor area, where there are two snakes a fer-de-lance and a boa constrictor (in reptile tanks not on the ground I would like to add!!)

We start learning about the 8 poisonous snakes in Belize. Oops, I am now seriously regretting wearing sandals for my night tour at the zoo. Who knows who we might meet!!

The fer-de-lance is the most common of the venomous snakes in Belize and can grow up to 8 feet long. Arhh that’s bigger than me! Well bigger than most people haha. The snakes will only attack if provoked. It’s useful to know what it looks like in case we see one on the tour or indeed during the rest of my trip in Belize.

The idea of the Belize Zoo night tour is to show you some of the animals that are nocturnal, therefore more active at night time. So don’t expect to see every animal in the zoo on the tour. And also some of my photos were rubbish so I have swapped for the daytime pictures!

Meeting the Tapirs at Belize Zoo

Our next stop is the playful possums who are pretty active, followed by the white-tailed deer. Opposite them is a friendly Tapir. I have never seen one before and had no idea how big they were. Although you might think similar to a pig, they are in fact related to horses and rhinos.

We have some treats with us so he gets fed with some healthy snacks. He’s a herbivore so munching on a carrot. Tapirs are endangered due to hunting and loss of habitat. 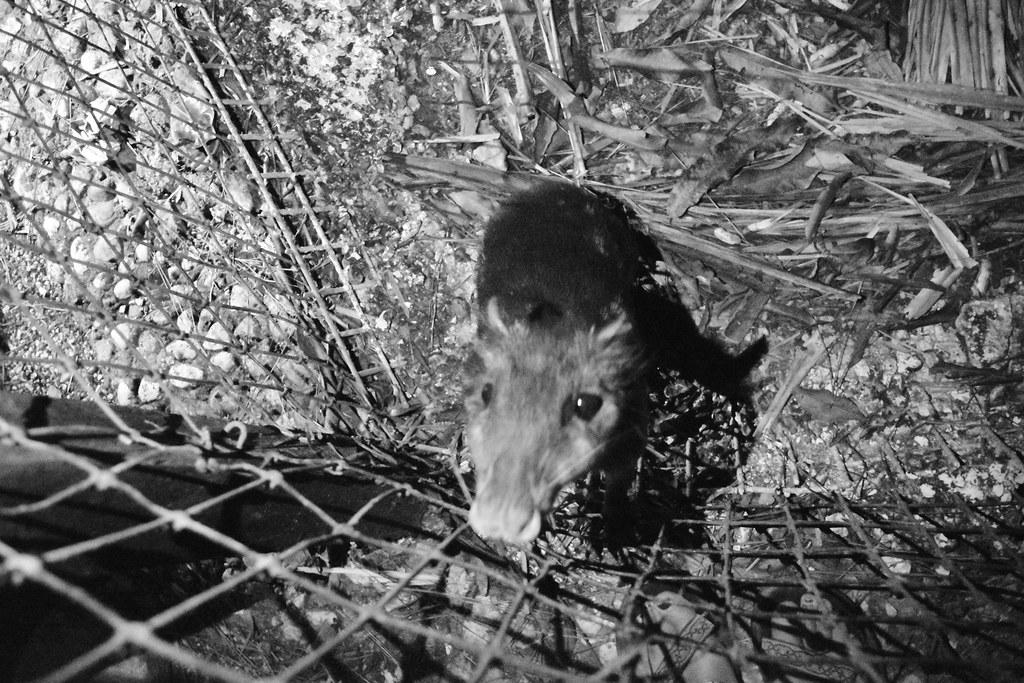 Then it’s on to the pacas, also known as gibnuts, they are pretty cute. I love the quirky signs next to each animal enclosure as well.  These are open enclosures so it’s nice to be able to get so close to them.

Now on to the big cats or some not so big. There are 5 species of cat in Belize and 4 out of 5 live here at Belize Zoo. Our first one is the margay.  We then meet the puma and ocelot. The sign next to him explains how these beautiful cats are now illegal to hunt (thank goodness) but it would have taken 100 ocelots to make a coat.

That’s a scary number. I am so glad it’s illegal now.

And finally the beautiful Jaguar on the Night Tour

It’s definitely lovely to see the cats at night. They are much more active instead of sleeping which I noticed the next morning when I visited.  Although the tour guide does have a few snacks for him!

Lastly, we pop to see the various owls, there’s a very cute pygmy one. I have to admit these guys weren’t very active, they did have a good look around at us and they were beautiful to see.

Overall the night tour was excellent and very educational. Part of me wished it had lasted a bit longer (an hour tour). But it’s good to know they give the animals time away from people so it’s probably a good thing.

Visiting Belize zoo during the day

The following day, I arrived as soon as the zoo opened. This worked out quite well as I was the only person there for most of the time. It’s also a lot cooler than visiting during the middle of the day.

The zoo is not too big; although if you are like me and love photography then you might be a bit longer. I would allow a minimum of 2 hours to fully enjoy your visit. Longer if you want to include a visit to the café and gift shop!

I headed in the same direction as the night before, walking past the possums who were snoozing. Then on to the white-tailed deer and tapir, both were just chilling out in their enclosures.

One animal I had not seen at night was the monkeys. The two species that live in Belize are the endangered black howler monkey and spider monkey. Don’t worry if you have a spider phobia they won’t scare you! There’s a walkway with steps taking you on to a higher platform, I spotted them from the ground but it’s nice to be able to get closer, especially to take photos.

If you want to see Howler Monkeys in the wild there’s a great chance to see them at the Mayan ruins of Lamanai, further north in Belize and a great place to visit.

Take your time exploring the paths, it’s pretty easy to find your way around. Visit the many birds – King vulture, Scarlet Macaw, Jabiru stork, Hawk Eagle and my favourite and the national bird of Belize – the toucan. Did you know they make a sound a bit like a croaking frog? Listen out if you are in the jungle, you’ll probably hear them.

Belize Zoo – Have a chat with the Macaw

Jaguar comes for a quick visit

And my last stop and where I spent the longest was back with the big cats. It was very different to the night time experience. The ocelot was no-where to be found, the pumas were snoozing in the shade and the margay was also sleeping up in a tree.

I was lucky enough that I spotted the guide from the night before and he called the jaguar over to say hello. He wandered over, had a drink and then disappeared back into the share. I don’t blame him!

What are the Differences between The night Tour and daytime at the Belize Zoo? 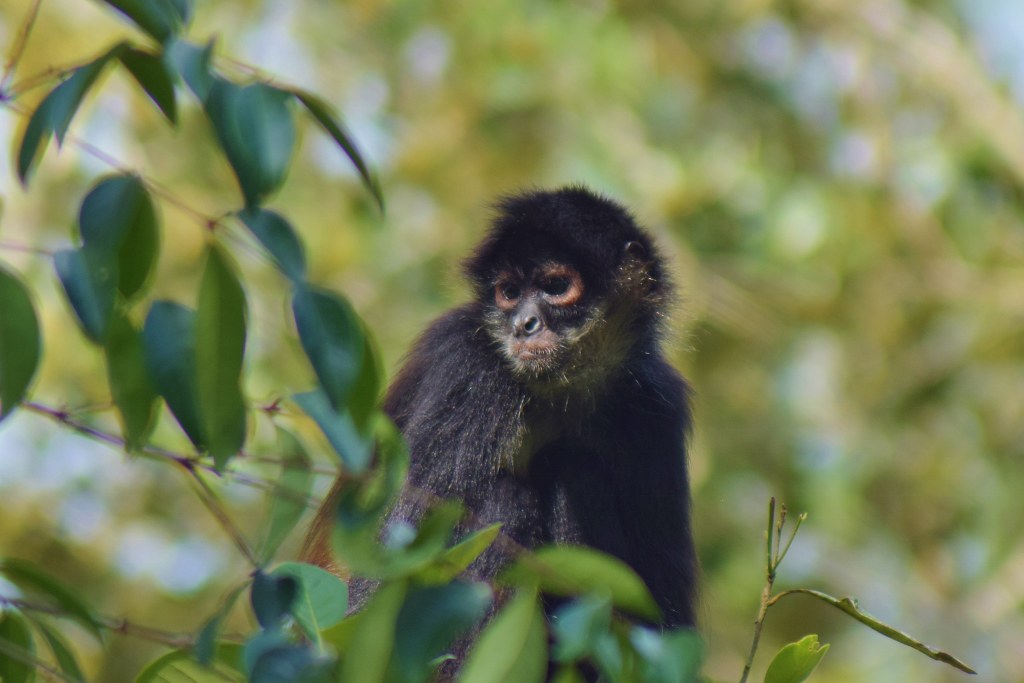 How to get there? – Buses run from Belize City or San Ignacio (ask the driver to stop outside).

Staying at the Tropical Education Centre

The Tropical Education Centre (TEC) is part of Belize Zoo and just a couple of miles down the road.

What an amazing find. There are dorms rooms or cabins available, hidden among various nature trails around the Centre so you really feel like you are in the jungle. I shared one of the cabins with a girl I was travelling with – a bit of luxury after staying in dorm rooms for a few days! We had a double bed each, a bar

Looking for some more adventures on your Belize trip? Why not check out Exploring the ATM Caves or visiting the historic Lamanai Mayan Ruins near the town Orange Walk.

There are also trails around the centre that you can explore in your own time.

Are you going to visit Belize zoo?

I hope this has tempted you to add Belize Zoo to your itinerary if you are visiting Belize. And maybe arranging the night tour too! I found both day and night experiences thoroughly enjoyable and would recommend visiting.

Part of visiting a country is learning about their culture, nature and wildlife. Belize Zoo ticks all these boxes, you won’t be disappointed!

Read more of my Wildlife experiences in Belize here.

*Costs and times are correct at time of writing.

Have you visited the Belize Zoo and their native animals? Do you have any more questions about visiting or doing the Belize Zoo night tour? Ask me in the comments below or message meme via my Facebook page @beckythetraveller

*Becky the Traveller participates in the Amazon Services Associates Programme, as well as other affiliate programmes. If you make a purchase through these, I earn from the qualifying links. This is at no extra cost to you. Read more here.

Click here to support ‘Becky the Traveller’ via Patreon